Lary Dunsmore is an active and athletic 70-year-old. A retired middle and high school teacher, he now spends much of his time volunteering for Sanchez Elementary and Everett Middle Schools in San Francisco where he builds and maintains gardens.

His garden at Sanchez school includes fruit trees and 14 raised beds with blue heirloom wheat, quinoa, tomatoes, squash, peppers, and cilantro, among other plants, all mostly grown from seed. A life-long teacher, Lary hopes to introduce more students and teachers to gardening and teach them about the interconnectedness of nature.

Lary grew up with plants, and years of working with children in the garden taught him to be humble. “People assume I am an expert. I don’t correct them,” he jokingly says. To relax on the weekends, Lary goes to the school’s garden to check on the plants and have some quiet time.

In addition to being a volunteer gardener, Lary enjoys outdoor activities with his family. Each summer, he backpacks in the Sierras with his younger brother and sister. To visit with his other siblings, he heads east to Minnesota where—depending on the season—they go canoeing or snowshoeing together. He says, “I’ve learned to appreciate everything and do things now while I still can. I will never be young again.”

Lary also connects with the community he has built with Shanti. Lary first learned about Shanti 15 years ago through a friend after feeling increasingly isolated due to his HIV+ diagnosis. Shanti’s model of support appealed to him, and he enrolled as a client. He found meaningful connections with others through support groups, workshops, and retreats “Shanti keeps me positive and gives me a strong support system,” says Lary.

Currently, Lary is a client in Shanti’s LGBTQ+ Aging & Abilities Support Network (LAASN). As a participant in the program, Lary receives compassionate care and support from staff, his peers, and his Peer Support Volunteer, Elijah. Lary and Elijah have been paired for four years, and each week they meet up for dinner and a walk. “He’s a great friend and gives my life balance. He’s young, so smart, and provides my life with intellectual stimulation. Elijah is a lifeline to keeping me actively engaged, which is great for my mental health,” says Lary.

Lary is grateful for the many years he’s been with Shanti.  “I used to feel isolated,” he remarks, “and Shanti has made a substantive difference in my life.” 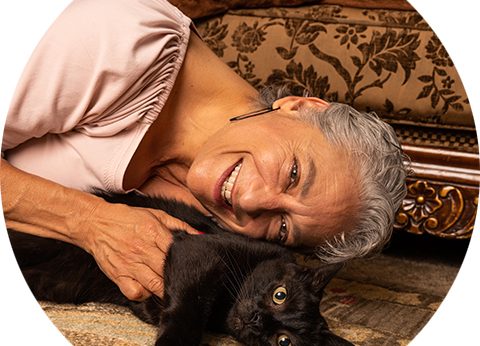